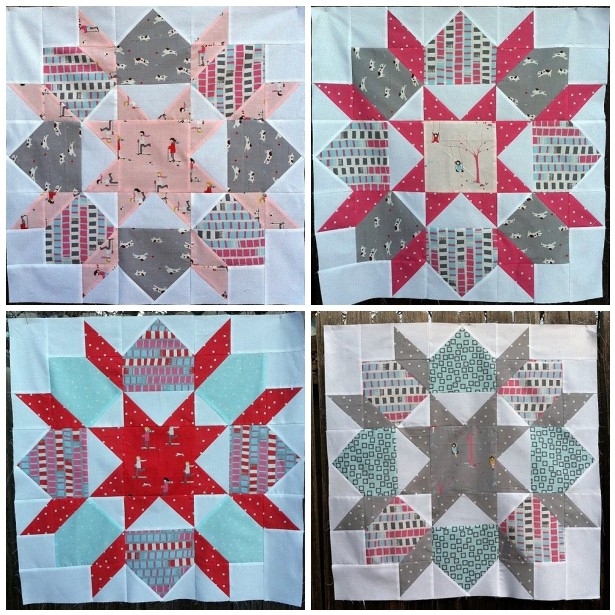 As of this afternoon, I am up to four Swoon blocks!  I have been having a lot of fun pairing the story prints to the background fabrics.  I love the scarf print in the outside rim, and I am going to try to use a little bit of it in each block I think.  I think it will help it all tie together in the end.  My goal is going to be to complete two blocks a week, which seems doable at this point.  It will ultimately end up on my daughter's big girl bed when she graduates from her crib.

You should definitely check out the flickr pool where there are such amazing blocks!  I can't believe there are over 850 people in the group now; there are going to be some amazing quilts!
Posted by audreypawdrey at 7:18 PM 3 comments: Links to this post 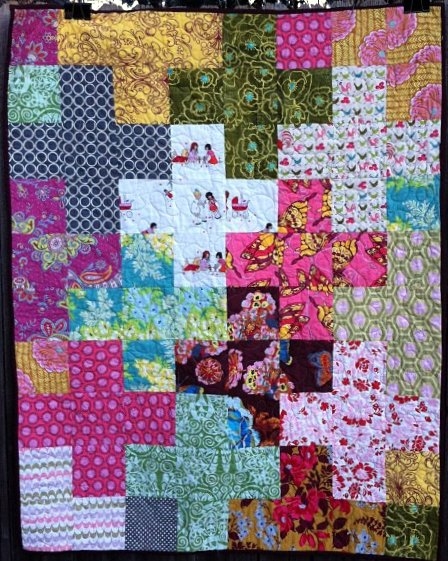 This past week I finished a plus or cross quilt for a new baby girl.  I wanted to try this pattern because I have seen it floating around, and I really like the way it shows off fabrics.  Each of the squares finishes at 4.5".  It is approximately 36" x 45", and it is a good crib size quilt.  It was a lot of fun pulling out different fabrics from my stash, and using some scraps up to finish it.  I really tried to balance low, medium, and high tones with this one, and play with different patterns, while trying to create a "girl" quilt that wasn't pastels.  I am sending it off to the recipient this week, and I hope she likes it!

I am linking up with Crazy Mom Quilt's Finish It Up Friday!  Go check out all the other finishes over there this week!
Posted by audreypawdrey at 6:17 AM 9 comments: Links to this post 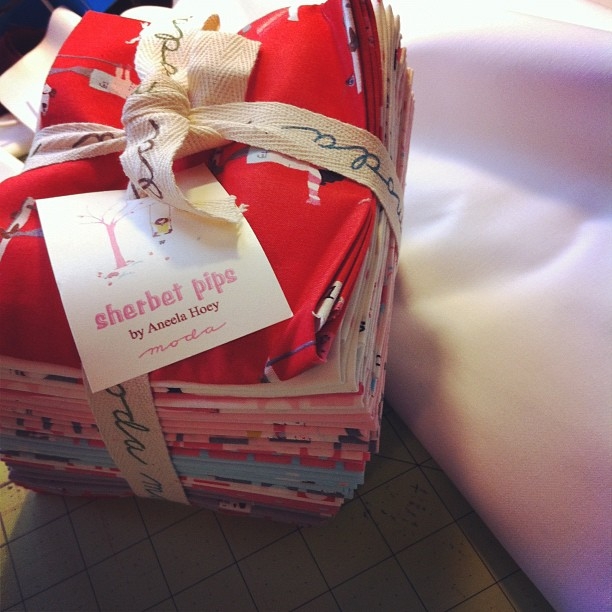 Last year I was dedicated to finishing up quilts, so my reward this year is the opportunity to start new ones!  Yay!  I have been hoarding two fat quarter stacks that I used birthday money last April to buy since last April with the idea that I would make my daughter two matching twin sized quilts for her future twin beds when she moves up to a big girl bed.  Right now she is 28 months and quite happy in her crib still, and we don't plan on moving her until it is necessary!  So, I am planning ahead.

I was determined to wait until I found a pattern that I loved for her bed(s) before I used up my precious Pips.  I love the single girl quilt, and I seriously considered that pattern, but I felt like a lot of the people would end up decapitated, which is never a good thing. :) I do plan on making one of those eventually, but not with my pips.  It is such the perfect pattern for a little girl though!  I do plan on making a throw using some of my scraps from this project and others that blend to put into this room eventually...

This past December I finally decided on the Swoon pattern, and all of a sudden it became a quilt-a-long hosted by Katy. This was my fortuitous moment where I decided that I was supposed to make this quilt! 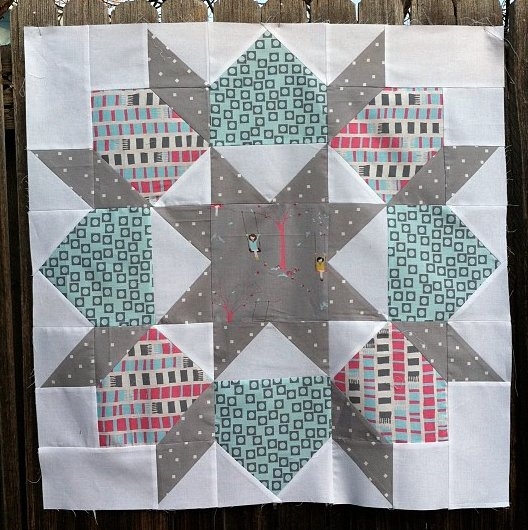 Last weekend we had a sewing day with the Front Range Modern Quilt Guild, which is a fabulous group if you live in the Front Range area of Colorado from just south of Colorado Springs to Denver/Boulder (you should definitely join!), and my friend Kari was making a block for the Swoon-a-long, which I had already joined but hadn't started cutting.  She figured out a way to make the block a little easier by omitting some of the seams, but the caveat is you need a little more fabric.  I decided this was the way to go, and I quickly jumped on board.

So, I made this block on Monday and finished it on Monday!  I did have to rip and rip and rip, but I would have been doing that anyway.  I think that happens anytime you are trying to beat the clock of when nap time ends!  I really love it, and Kari has a abbreviated version of how to do it on her blog, which will make sense if you have the pattern already.:)

I am very excited about this swoon-a-long, and if you haven't already joined, now is the perfect time!
Posted by audreypawdrey at 9:22 PM 6 comments: Links to this post

I didn't mean to be away from this space for so long.  Things became incredibly busy around here with working full time, going to a fabulous quilt retreat, having guests for Thanksgiving and Christmas, and loving on my two-year-old girl.  I have been sewing away, but I didn't have time to take pictures or upload them or much of anything on the blogging front, which means I have new things to share!

One of my favorite things to do on New Year's is look back at everything I have made over the previous year, so I am going to share that quickly here. 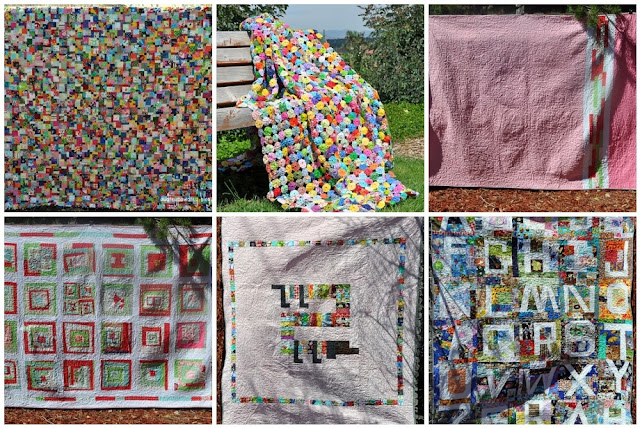 This year every quilt I made I absolutely love!

I also worked on several smaller projects throughout the year. 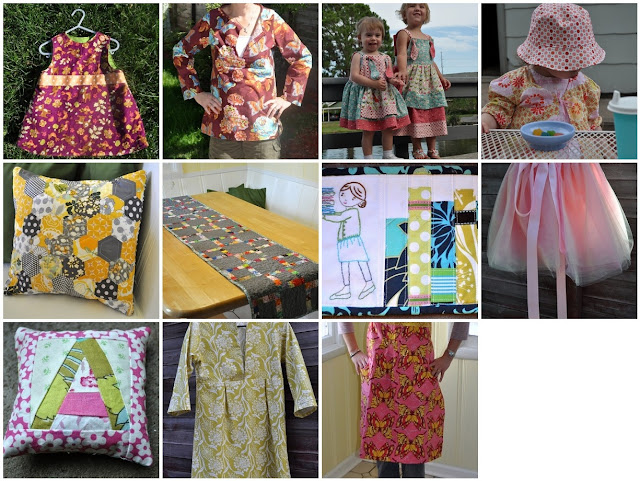 This coming year I would like to complete the following projects:
-6 dresses for my daughter
-Dog Quilt-(almost finished!)
-Sherbert Pips Quilt-two of these!
-start my Farmer's wife quilt
-baby quilt for my new niece or nephew born in June 2012
-another baby quilt
-Geese in the Forest Quilt-started/ need to finish
-Christmas Quilt for next year
-String Quilt
-Spring tablerunner for my mom
-Finish one more wip

I am hoping setting these goals will help me get them done!  Happy New Year everyone!
Posted by audreypawdrey at 4:57 PM 5 comments: Links to this post