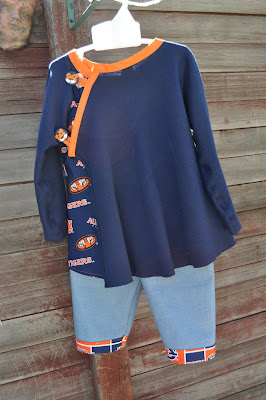 This past week I made Zerah another Auburn outfit. I think this will be the last one for this fall because she now has plenty of Auburn themed clothing items: A-lined Lucy Aubie dress, Polka Dot Crossover Dress with orange ribbons, an Auburn T-shirt, a cheerleader outfit, and a bubble suit! She could wear a different Auburn outfit for six days straight!

The top in the picture is the Little Woo by Patterns by Figgy. It is a very easy pattern to put together; although, I managed to assemble it with the slit on the left side instead of the right side that the pattern calls for! The hardest part was cutting out the knit material; it kept sliding and wrinkling up. I love how woven cotton stays flat. used some scrap Auburn material that I had in my stash for the cotton on the left that peeks out of the side of the shirt. I made my own fabric covered buttons with little tigers for the buttons. That is my favorite part! I also love the orange binding around the collar. It is a 12 month size and the sleeves are super long on Zerah. She is petite, but they are possibly 6 inches too long! I am debating cutting off the length or saving it for when she grows into it.

The pants went together quickly on Saturday. I added an Auburn themed cuff to the bottom of this stretchy chambray material I had to make the little pants. They are a little short, so I am going to lengthen this pattern next time.

Last week was Kid's Challenge Week at Elsie Marley, and I did finish these little pants and top for Zerah. The challenge is to sew for an hour a day for seven days. I failed miserably at this! I spent an hour Wednesday night preparing the pattern (tracing the pattern, cutting out fabric) and two hours Thursday making the Little Woo Top. I only managed to finish the top on Thursday because I took the day off work, so I could sew during Zerah's naps. Saturday, I made the pants in about an hour. So I spent about about 4 out of the 7 hours of the challenge this past week sewing.

I think the next project I work on will be finishing up some old ufos. Hope everyone is doing well!
Posted by audreypawdrey at 6:34 AM No comments: Links to this post 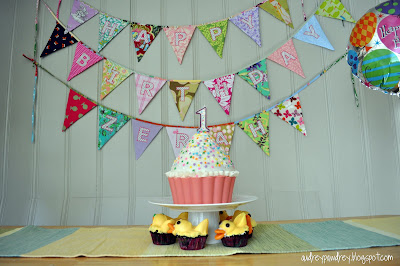 Zerah had her first birthday last weekend! I can't believe it has been a year already since she was born. The time goes by so fast! I spent the week before her birthday getting some crafty items ready for her party. 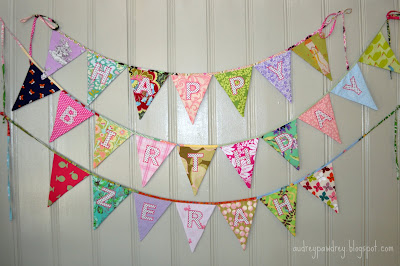 I want to start certain traditions with her that stay the same as she gets older. One of the things I want to do is hang a birthday banner that she has her picture taken with every year on her birthday so you can see how much she has grown. I also like the idea of the banner being reusable and a non-plastic item, so I made her one for her birthday this year! 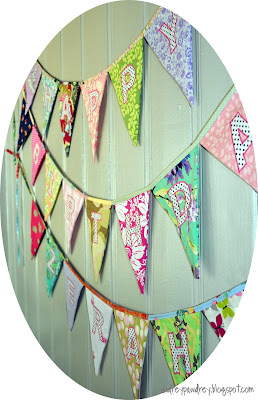 The pennants are about nine inches long and eight and a half inches across. Most of the fabric I used is leftover from dresses that I have made her this past year. I like that as we pull it out in years to come will be a reminder of all the little dresses that I made her this past year. There are a few pieces that haven't been made into clothing yet but will be soon. I took pictures during the process, so if anyone is interested in how I made this, I will be happy to post a tutorial soon. 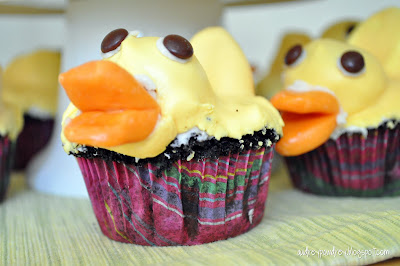 One of Zerah's favorite things are ducks! It is one of the first words that she said and she loves rubber duckies, so I had to make her duck cupcakes. I have never tried making "fancy" cupcakes before, so I was super pleased with how these turned out. I watched this tutorial on youtube, which really explains how to make these 3-D cupcakes. My mom and I had a good time putting these cupcakes together the night before her birthday. I made Hershey Extra Dark Cake for the cupcakes following the directions on the extra dark cocoa powder container. I over filled the cupcake pan, and they overflowed in the oven! My mom and I were able to salvage them by trimming the excess off the sides, and it turned out fine.

The best part was as soon as Zerah saw the cupcakes, she said, "Duck!" and proceeded to suck on one of the duck's beaks. She got excited everytime she saw one of her cupcakes, which was my intention all along.;) 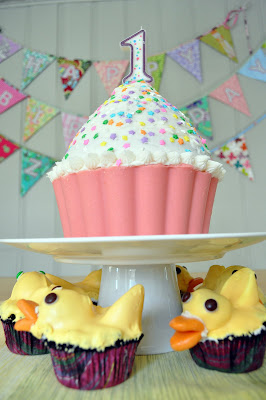 For her cake, I used the Great Big Cupcake pan from William's and Sonoma. It went together very easily. For the liner, I melted candy coating in the pan, and once it hardened, popped it out of the pan. I had to cut the bottom of the cake down to make it fit in the liner. I read that you can use small round pans for the bottom, and the cake will fit easily in the liner that way. I followed instructions that I found here for the liner. The cake was Vanilla with Vanilla Buttercream icing found on the package for the cupcake pan.

We used sprinkles to decorate it and a "1" candle for the top! 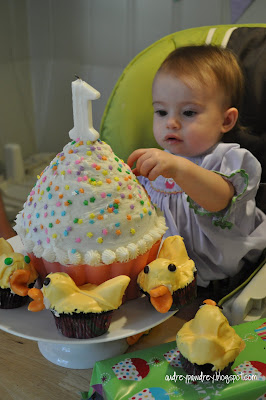 I need to get another picture of her birthday dress. My mom found it for her, and it was so cute. It is a smocked, light purple dress with cupcakes around the collar. So cute! It was a great birthday! She received so many beautiful handmade items for her birthday that I will share later on in the week.
Posted by audreypawdrey at 11:57 AM 3 comments: Links to this post 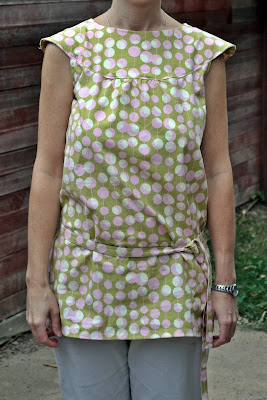 I finished another Anna Tunic this past weekend, and I wore it for the first time yesterday! It is a little wrinkled after being worn all day, but I wanted to snap a picture to share. I used Amy Butler's Midwest Modern line, and I made a small this time. It fits much better every where except under the armholes. It is a little high but wearable. I am debating cutting it a little lower and redoing it. 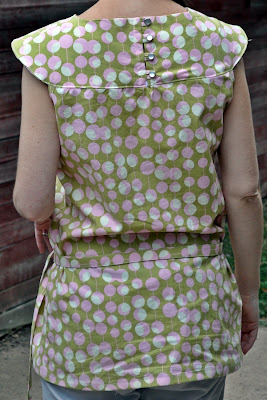 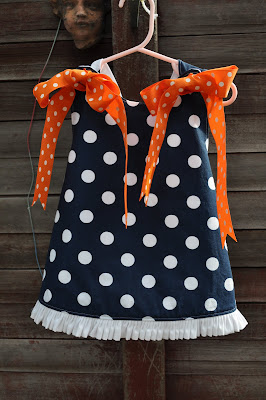 I made this dress this past week for a potential customer on etsy, but I think I may need to keep it! If I do sell it, then I am making one for Zerah, too. It is perfect for watching Auburn football games this fall. It will be cute with a long sleeve onesie underneath, too! 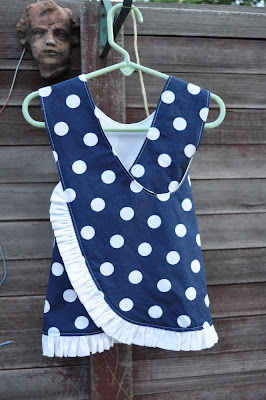 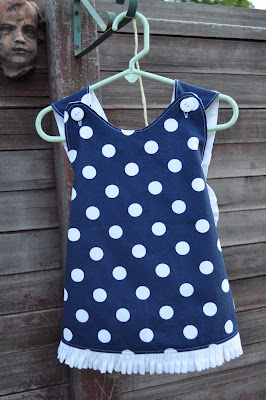 I sewed buttonholes on the ribbon, so it can be attached to the buttons on the front of the dress. That way the ribbon can be taken off for naps or for when it is being washed!
Posted by audreypawdrey at 6:05 AM 1 comment: Links to this post