Queen of Hearts and Alice in Wonderland Costume Set GIVEAWAY!!!!

Definitely check out this giveaway! The costumes are amazing and would be wonderful for Halloween!

Queen of Hearts and Alice in Wonderland Costume Set GIVEAWAY!!!!
Posted by audreypawdrey at 1:25 PM 2 comments: Links to this post

I finished up my blocks for the two swap groups I am in this past week. Both John and Amandajean requested houses inspired by this quilt. Isn't it beautiful? It makes me want a house quilt of my own! 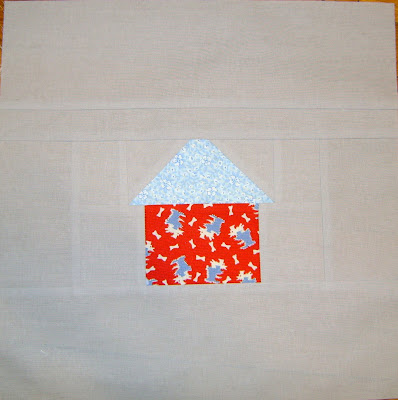 The first block is for quiltdad. He sent a lovely gray Kona cotton and we added scraps from our collection for the houses. I couldn't resist making a dog house.:) 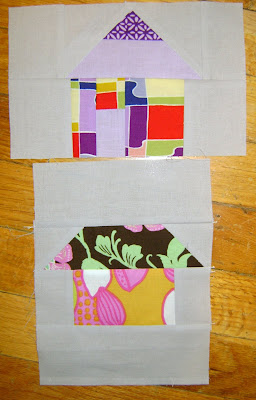 I used the leftover gray to make two additional bonus houses for him. I ran out of the gray, so he will have to add it to make it 12.5 inches square. I just couldn't resist! Once I finished, I realized that the light purple is really too close in tonal value to the gray;it doesn't show up as much as I had hoped, but it is bonus or lagniappe so he could not use it if it doesn't work! 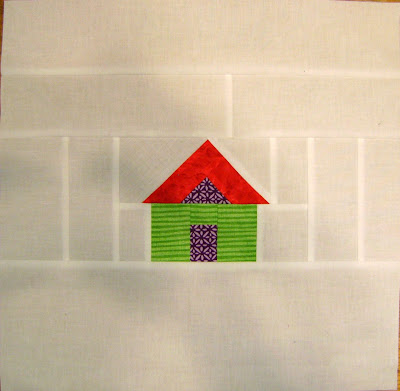 My last house is for amandajean. Her block is 15.5" square. I learned from my experience with the lavendar to use really bright colors and I played with the roof detail. It reminds me of the eaves on 1920's mission style houses or victorian houses that I see when I take my dog out for walks around the neighborhood.

It feels good to finally have something quilty to share! I hope everyone has a wonderful weekend!
Posted by audreypawdrey at 3:56 PM 6 comments: Links to this post 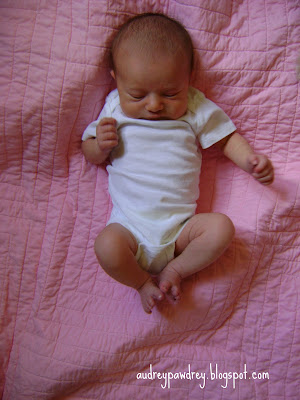 I haven't been around much in this space recently, but there is a a very good reason! Please let me introduce our new little girl, Zerah Blythe. She was born on September 19th at 2:30 a.m. I have been spending all my time, it seems, just admiring this little one.

I worked up until the day she was born. I think I willed her to wait to come until I had finished up everything at work! My last scheduled day was Friday and I left work right before lunch because I was having contractions that were twenty minutes apart-they were 3 minutes apart by noon! She was due on Sunday, the 20th.

We went into the hospital at 1:30 that afternoon, but were sent home because the contractions were not intense enough, and I wasn't dilated at all. That was extremely frustrating. I was determined not to be sent home from the hospital again so I waited until I couldn't stand it anymore-so we left for the hospital at midnight. I still wasn't sure if we should leave or wait a little longer and told my husband and mom that I was sorry if we were sent home again.

When we arrived, the hospital was super busy with four people that came in at the same time as me with one girl's water breaking upon arrival. When they finally checked sometime after 1 am, I was dilated to 7 cm, and Zerah was born an hour an a half later. I had not fully decided if I wanted drugs or not, so when they asked me if I wanted an epidural at around 1:30 I decided I had come this far without it and could persevere without one. I was very freaked out about a shot in my spine and some of the side effects; I am glad I did not have one because it would have kicked in almost too late and lasted longer than I needed it. Since I did not have one, I was alert and Zerah was fully alert when she was born. It really happened just like I wanted it to; I was very blessed to have a really good experience. Most of the delivery doctors were out of town on a retreat that night so a midwife who works for the hospital was the one who delivered Zerah; I think this worked out for the best, too.

My mom lives out of town and was originally scheduled to arrive Saturday night. When I talked to my parents Thursday night, my dad decided Zerah was going to come early so he convinced her to fly out a day early. I don't know how he knew because I sure didn't! She arrived at our house at ten, just in time to go to the hospital with us at midnight and be there for her grand-daughter's birth.

She is named after my great-grandmother and my husband's grandmother. We wanted something unique that was also from our family. 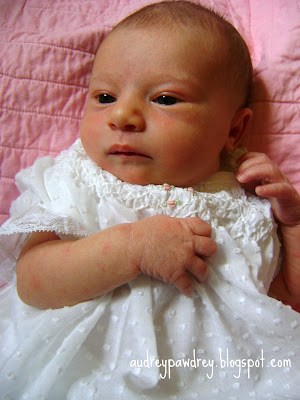 We are all doing well and starting to catch up on everything. I actually have had a little bit of time to sew this past week.:)
Posted by audreypawdrey at 9:43 AM 21 comments: Links to this post 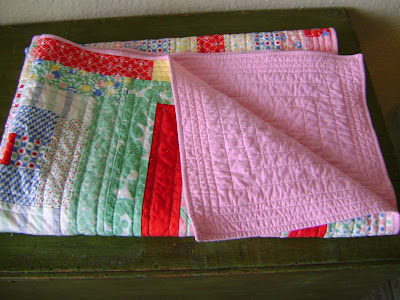 I am so excited that it is time for Amy's Quilt Festival again! This is one of my favorite quilts that I finished this summer for my new little girl, Zerah. 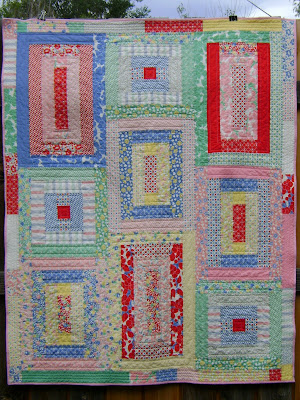 I really like the modern simplicity of the boxes within boxes and the pieced border. It is made from a jellyroll of Hello Betty by chloe's closet for moda. I also like the quilting mimicing the same boxes. The quilting took forever! Silly me, I thought this type of quilting would go faster than all over stippling, but I am glad I went in this direction. 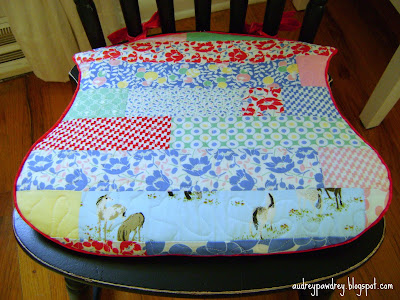 I also made a matching cushion for her rocking chair with a few other prints thrown in for good measure. More details about this quilt can be found on the original post here.

Check out the rest of the entries at Parkcitygirl!

Posted by audreypawdrey at 9:25 AM 22 comments: Links to this post